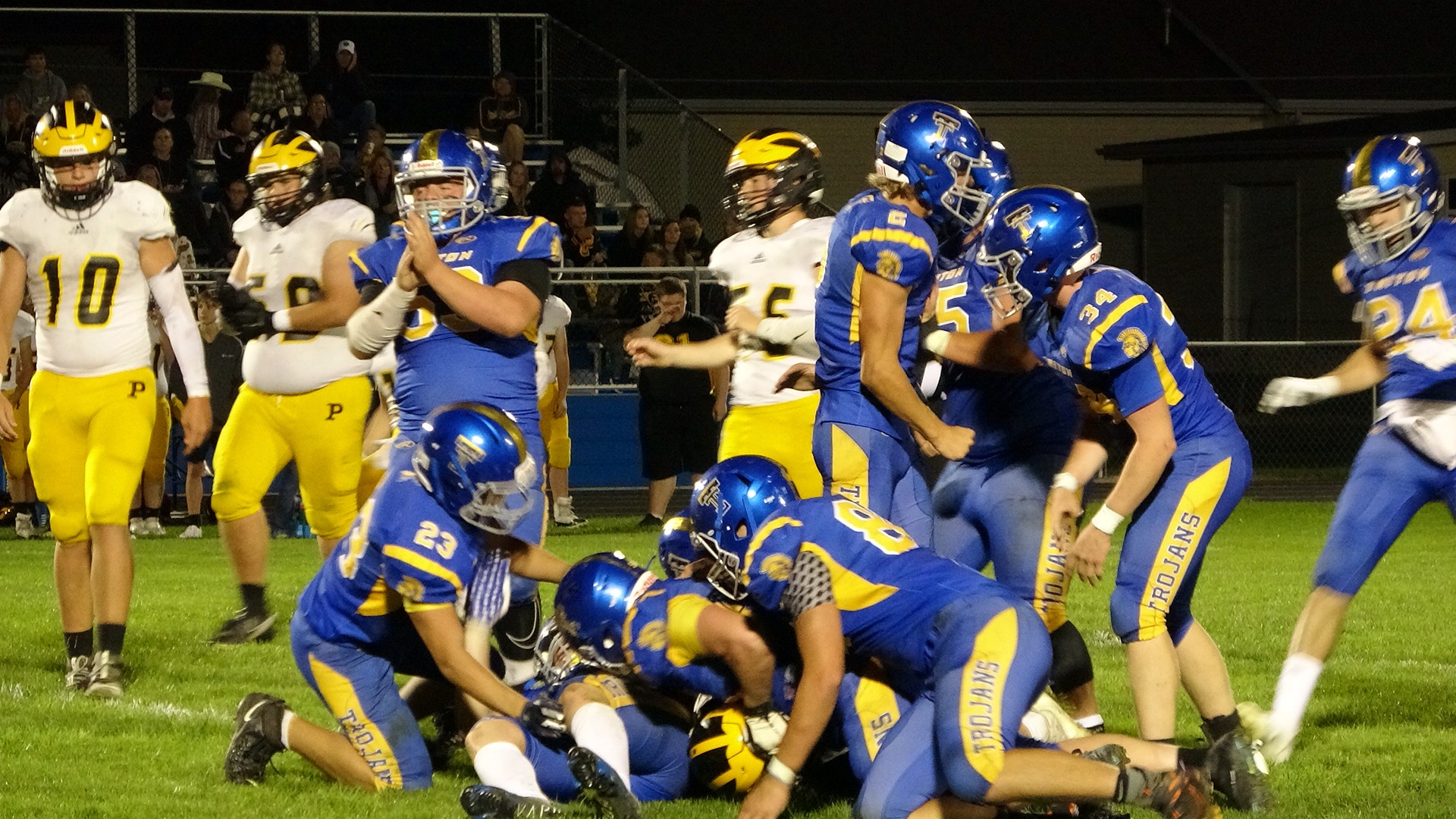 BOURBON - As the midway point of the season has passed, the steep and furious downhill ride to postseason play is well underway. Triton’s remaining 4 games come with some true tests of the season. Pioneer came to the “Trojan Tundra” looking to keep their perfect record against Triton intact. After last season where the game was closer than the score indicated, Triton was on a mission to do something that has eluded them the previous 8 meetings, tame the juggernaut program that is Pioneer. 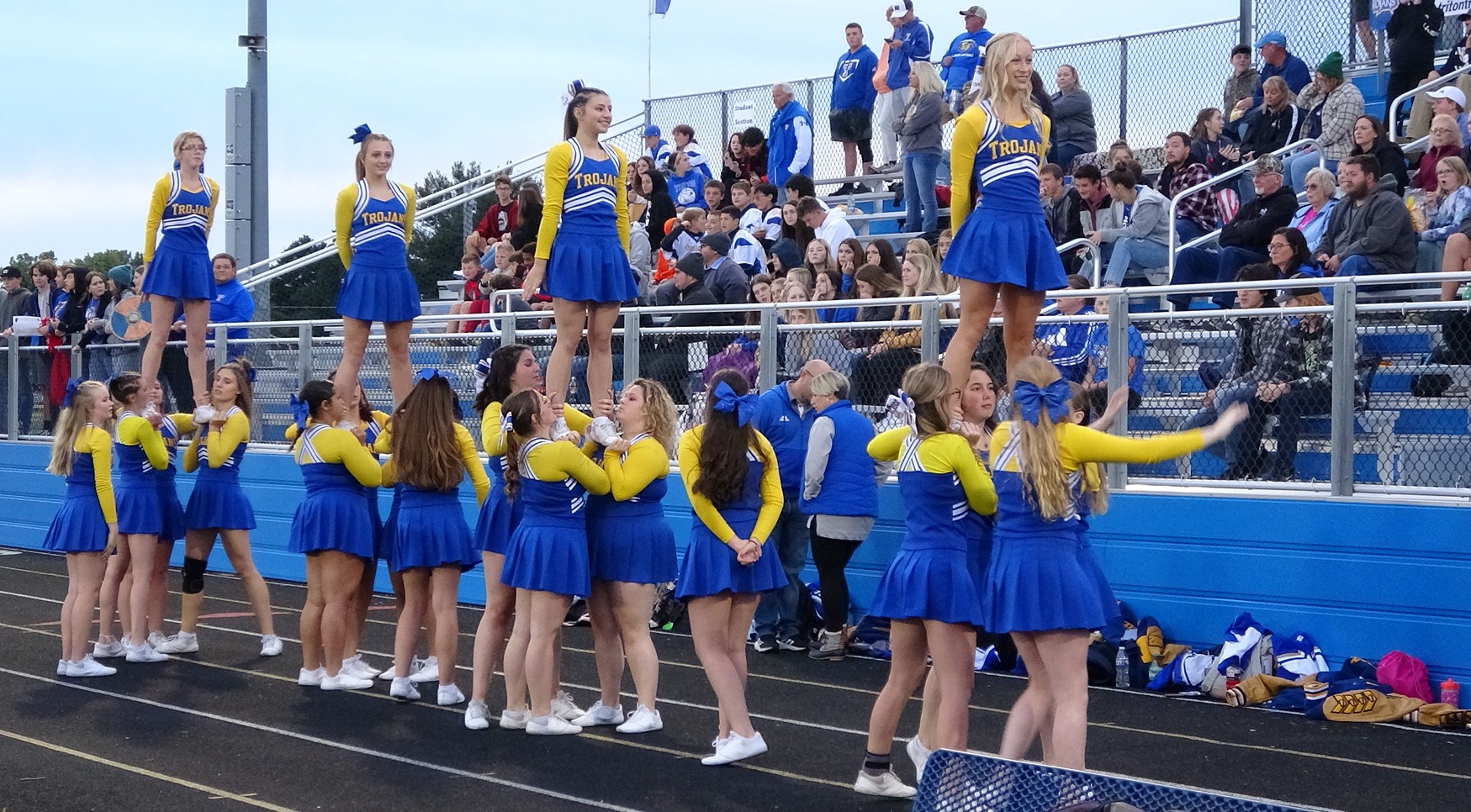 Another great showing from the Trojan Faithful led to yet another electric Friday night atmosphere. Mason McIntyre was presented with the Fan of the Week honor, the Spirit of Triton marching band was dressed for success, and the community showed up yet again in full strength. 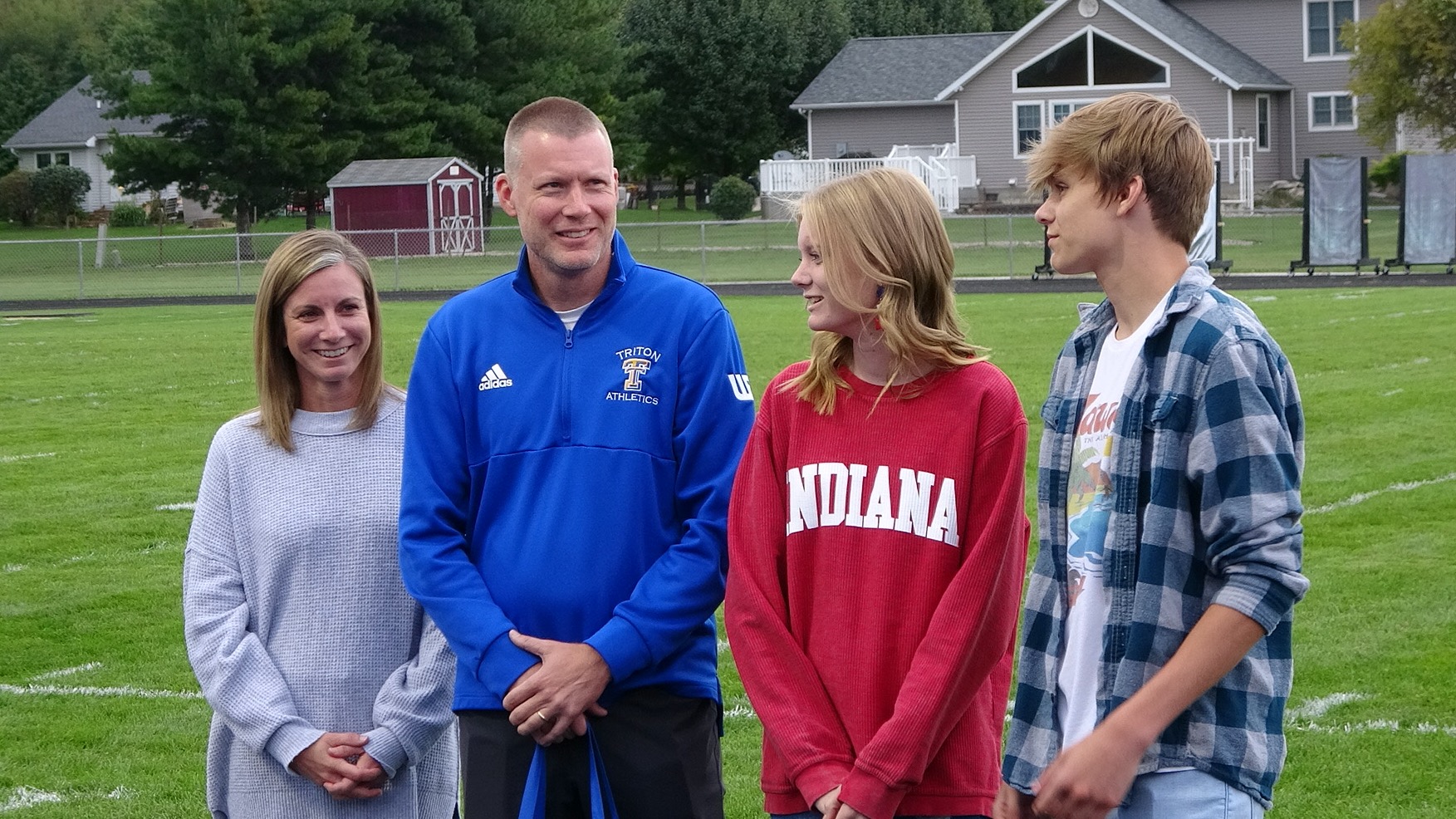 Mason McIntyre and family honored as 'Fan of the Week'

Triton took the opening kickoff and went 3 and out to start the game. Pioneer on their opening possession drove the ball down the field on a Hill to Zellers connection that showed the strength of the Pioneer offense. However, the Trojan defense had other plans as the Panthers were in the red zone. Forcing a turnover on downs, to get the ball back. The two teams went back and forth as if we were watching two heavyweights jabbing at one another, waiting to see who would blink first. 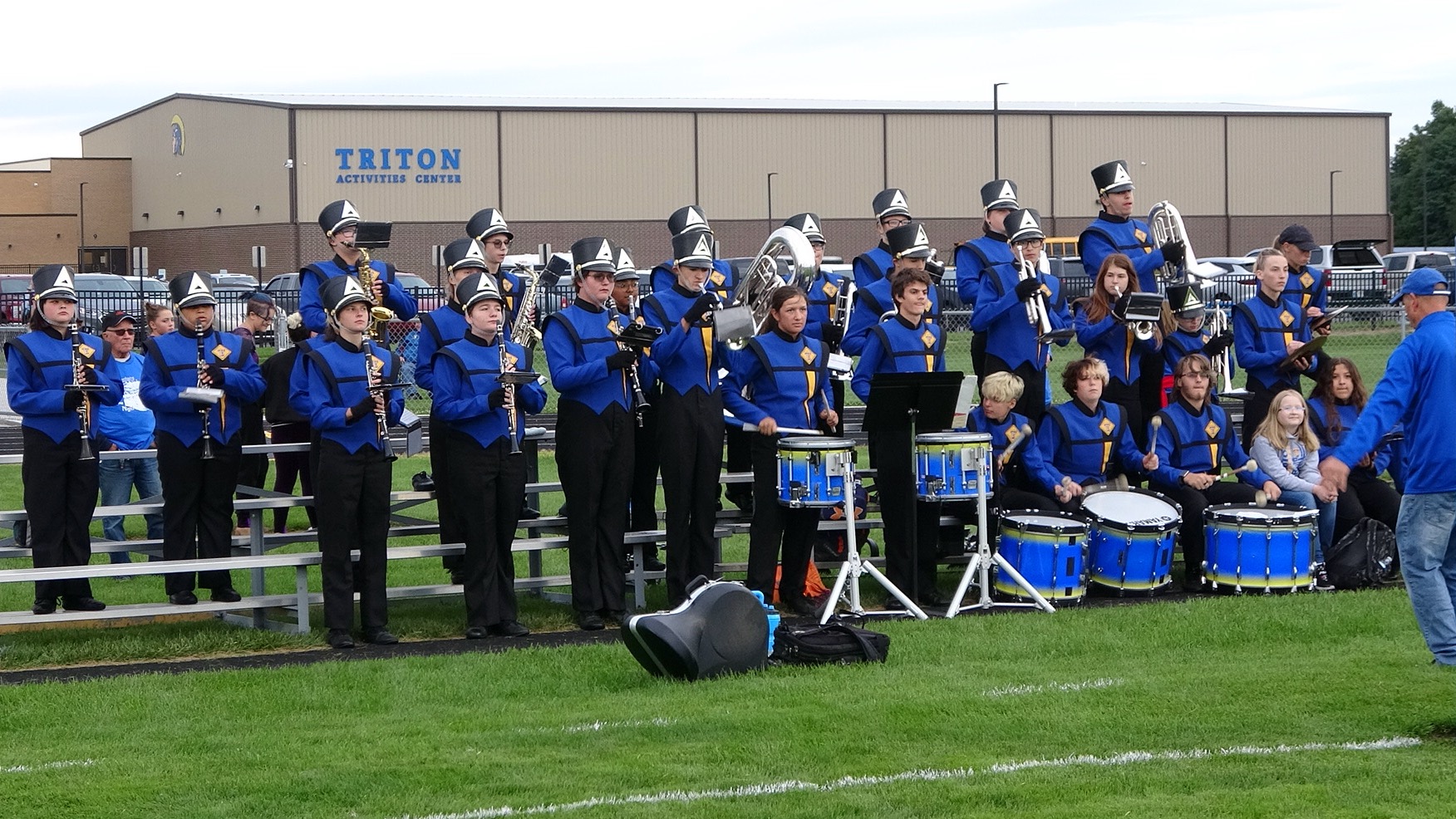 Both teams started to find traction in the 2nd quarter. Penalties and turnovers plagued the Trojan offense but the Triton defense and Cole Shively's running ability kept the Trojans in the game as the final moments of the first half ticked down. With less than 10 seconds left and 10 yards from the goal line, Triton reached a tipping point.  Coach Younis showed his confidence in his team, as they took a high-risk/high-reward final shot in the endzone. The risk paid off as Cole Shively found Anthony Schuh through the air on a 10-yard jump ball in the back of the endzone, the crowd erupted, and the fireworks sounded to celebrate the pivotal moment of the first half.

Pioneer had the ball to start the second half. After going three and out on their first second-half possession, Toloza struck from 60 yards out to put the Panthers on the board. Triton’s stout defense stood tall to prevent Pioneer from converting the 2-point conversion. Moments later Triton answered right back as Cole Shively scored on a 23-yard run to extend the Triton lead. Shively would score for the third time early in the 4th and finish with 132 yards rushing. 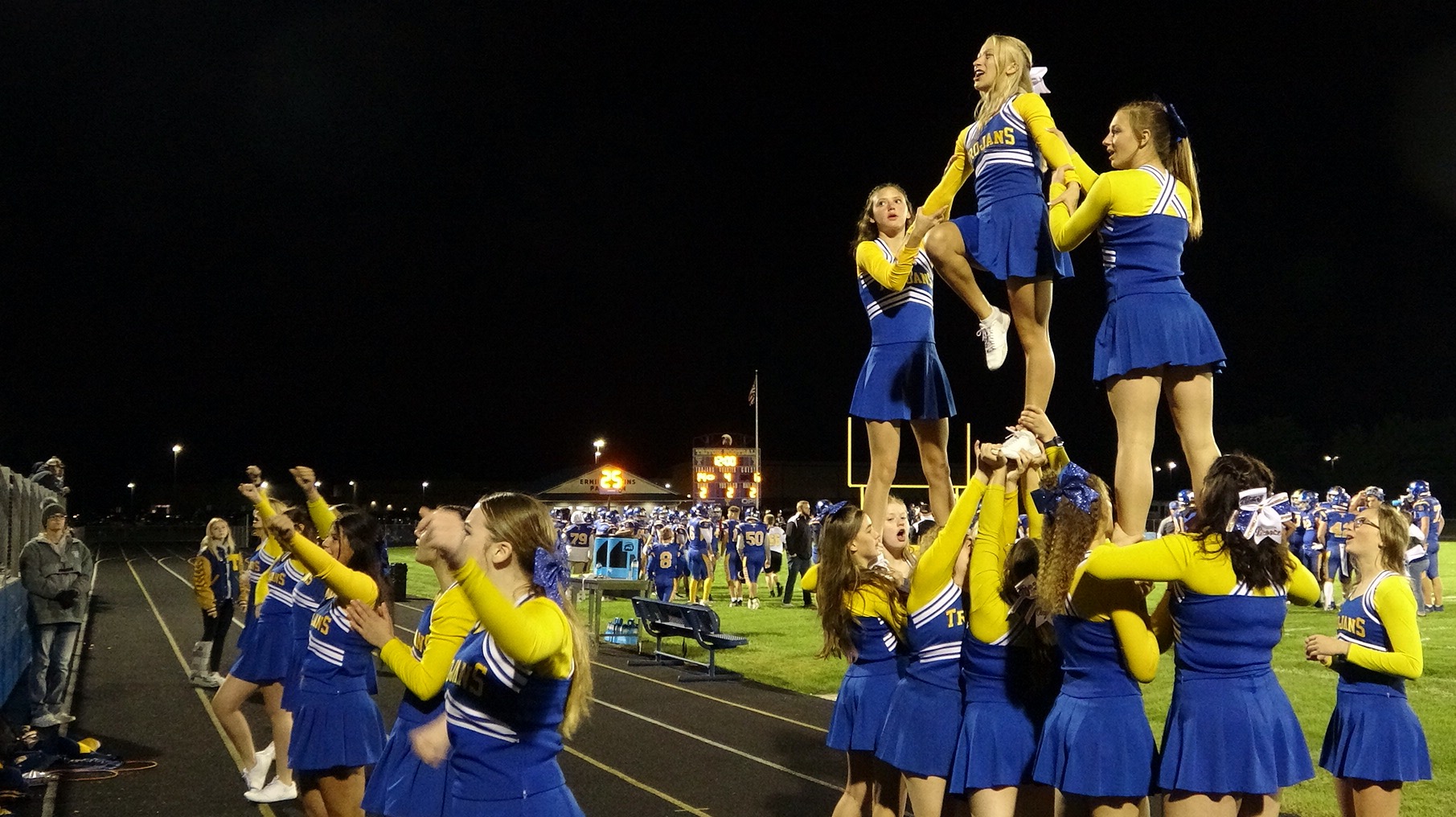 Toloza scored again for Pioneer, but Triton was not done yet. The conditioning and stamina by the Triton offensive line awoke the Beast in the backfield, as Anthony Schuh came alive to score two more times from 44 and 46 yards respectively. Schuh finished the night with 179 yards and 3 scores. In my postgame interview with him, he expressed his appreciation for the offensive line and blockers who paved the way. 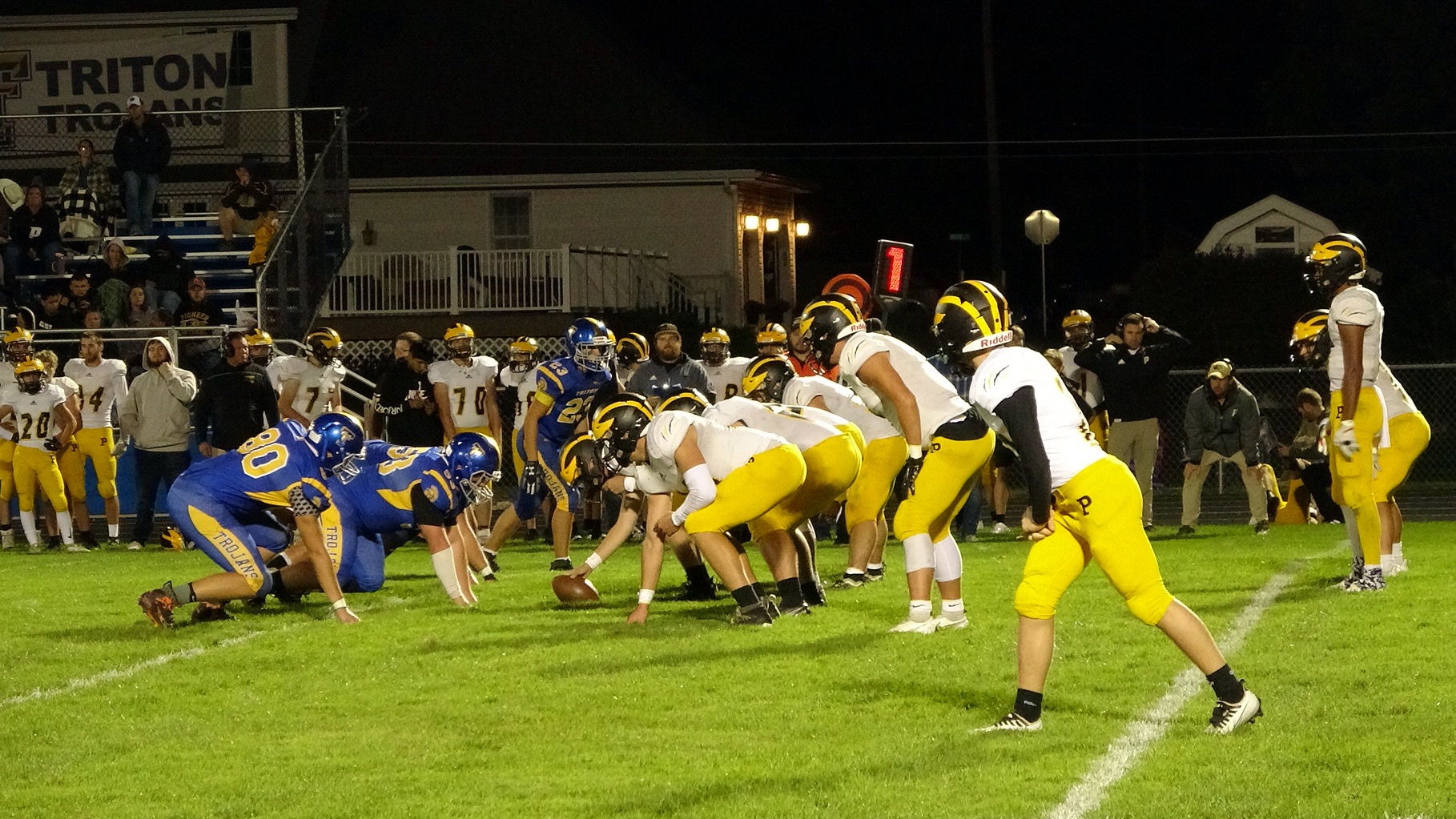 Triton’s defense was impressive all game. The team's tackling, their pursuit of the football, and how they played as one cohesive unit was evident in every play. The chaos they created with sacks from Esai Lemler and “The Lumberjack” Reilley Wood and a late interception by Cole Shively wore down the mighty Pioneer Panthers.

The Bourbon Fire Department helped fans celebrate with a firework after each Trojan score and a barrage of fireworks to mark Triton improving to 5-1 with one of their best starts in school history. This is a special group of young men. Their inspiring play on the field along with the support of the community is helping make this season even more special. The next 3 games will see the iron sharpening iron, as another tough test awaits at North Judson next Friday. A monumental matchup in the HNAC as 5-1 Triton takes on an undefeated North Judson team. Kickoff is set for 7:30 pm EDT. 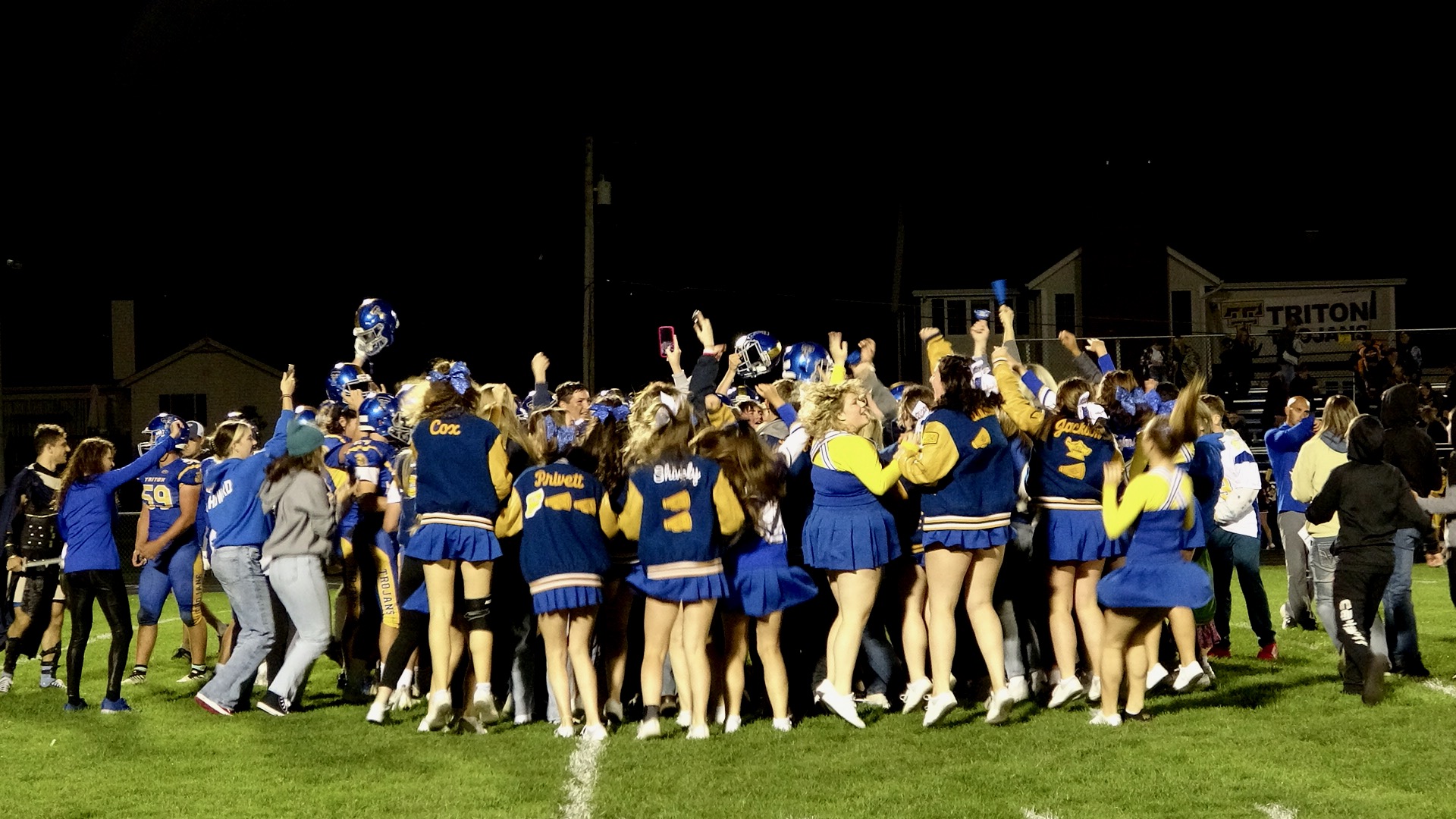